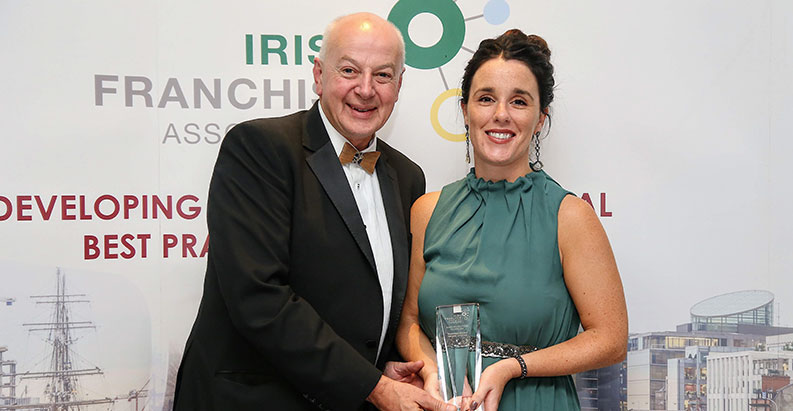 Held at Clontarf Castle on 28th September, The Irish Franchise Awards celebrate excellence in franchising and rewards outstanding achievements from the franchise community.

Managing Director Alison McGinley was proud to receive the prestigious award on behalf of TaxAssist.

“We were up against some well-known brands including Supermacs and ActionCoach, so to win the award is quite a coup” said Alison.

“Most accountancy firms are not known for their creativity and tend to stick to very corporate advertising, focusing on the firm and its credentials. We chose to differentiate ourselves last year by launching a highly successful ‘Do what you love’ campaign that talks about the client rather than us and that brings a very human element to the task of accounting.

“We invested heavily in this campaign which ran across radio, social media, and the internet and brought in 50% more calls from potential new clients than the previous year. Website traffic during the campaign was also at record numbers.

“It is this campaign plus other initiatives including embracing new technology, such as new apps and receipt tracking software, which has helped our franchisees to position themselves at the very forefront of their industry.”

Alison has ambitious plans for further growth for the TaxAssist network. “Over the next three years, we aim to grow the number of franchisees by a further seven, work with our franchisees to assist them in developing their areas by opening second shops, create a further 50 jobs and introduce more technology to help our clients easily keep track of their businesses.

“I would like to actively encourage any accountants interested in finding out more about joining our network, to give us a call on 01 854 0662.”

Using the franchise model, TaxAssist Accountants, which specialises in servicing small businesses and individual tax payers, has grown from zero to 19 franchises units since its inception in 2009, and the network now services the needs of close to 6,000 clients with a combined fee bank of over €5.5million.